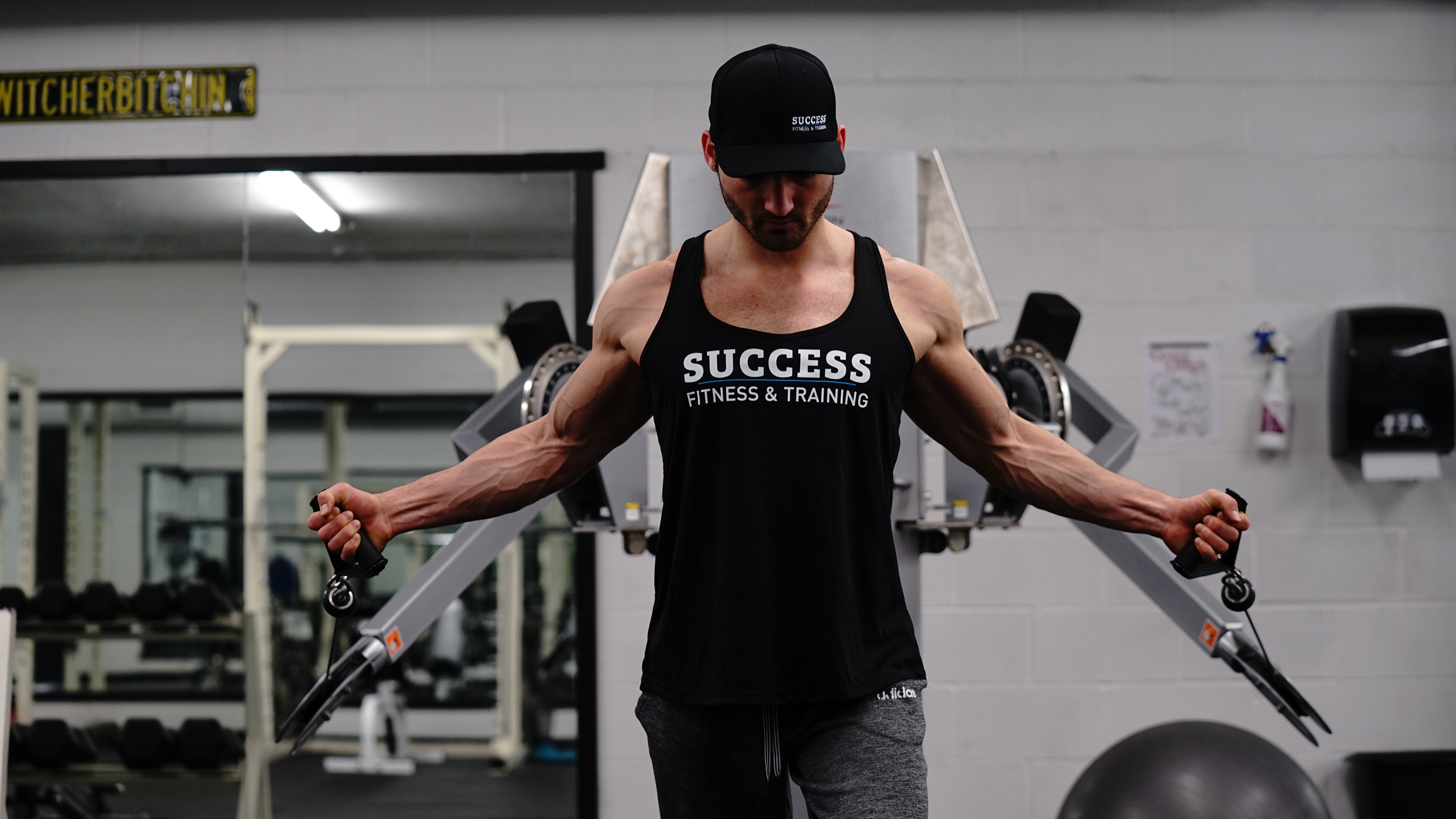 Before we get started, we must establish that weight loss and fat loss are different beasts.  When it comes to weight loss, the three things that we have control over are muscle weight, water weight, and fat weight.  Do we want to lose muscle?  I would hope not…Do we want to lose water weight?  Perhaps we might if we’re holding access water that leaves us looking/feeling bloated (excessive sodium and carbohydrates can make you store more water, but this has nothing to do with your body fat %).  When it comes to our health and wellbeing, though, the focus should be on fat loss.  And the only way to lose fat is to be in a calorie deficit.  Period.  I wanted to get this point out of the way as it is key to understanding weight loss myths.

Thankfully, this myth is being put to bed little by little, but it still persists never the less.  There is no way to spot reduce body fat in any way, shape or form.  If you happen to carry a lot of fat in your arms, for example, you cannot do biceps curls with the expectation that you will burn fat in that area.  Again, fat loss comes from a calorie deficit.  Your body/genetics dictate where the fat is pulled from for energy.  Over time, with a consistent diet, the totality of your body fat will decrease, but again, you cannot do sit ups to reduce tummy fat.

Myth #2: Carbs and/or fats are the enemy

Carbohydrates contain 4 calories per gram, whereas fat contains 9 calories per gram.  This implies that it is easier to over consume high fat foods, since they contain more calories (two tablespoons of peanut butter contain more calories than several cups of popcorn).  Carbs, again, contain only 4 calories per gram, which is the same as protein, but because of the way that protein is digested, there is a thermic effect (meaning that it takes more energy to digest than most carbs).  But carbs are a bit more complicated as there are simple carbs (such as sugar) and complex carbs (such as starch and fiber).  And fiber, like protein, also has a thermic effect (insoluble and soluble fiber both having varying thermic effects).

Clearly the way we discuss macronutrients (protein, carbs and fat) is very problematic.  There is no “bad” macronutrient, as they all contain calories, which is how we obtain energy to carry out our lives.  Carbs (in general) are our most readily available source of energy, while fat is another desired source of energy (but it is also key for our hormones).  Protein is less of a macronutrient that your body prioritizes for energy and it is instead the prime builder of tissue in the body (such as muscle tissue).

Every macronutrient serves its part.  No one macro on its own is responsible for the obesity epidemic.  It is instead the quantity of a combination of these macros that creates issues.  Typically, carbs and fats are more palatable (meaning foods high in these nutrients tend to taste better).  Who on earth craves plain egg whites (a pure protein source) over bread (carbs) and butter (fat)?  My general recommendation for success and satiety in one’s diet is to prioritize protein (in general), high fiber carbs, and (to some extent) fat sources high in Omega 3 (fish as well certain nuts and seeds) in your meals.

Every other month, it seems as though there is some new diet protocol being touted…But, as we should know at this point: CALORIES IN VS. CALORIES OUT is the only way to lose fat.

Similar to the previous myth, there really is no such thing as a “bad” food, so to speak.  It is very common to see extreme, elimination diets that demonize a certain food or macronutrient.  This has only contributed to the weight-loss issue by creating more confusion and disagreement.  There is no magic behind the weight loss of a ketogenic diet, for example.  Any weight lost on a keto diet will be water (because keto diets are low carb, and carbs store water) or fat loss from being in a CALORIE DEFICIT.  There are other reasons one might chose a keto diet (such as for mental clarity and focus), but fat loss should not necessarily be one of them. Similarly, a vegan diet should be chosen not for it being a miracle weight loss tool, but instead as a means to be more humane/more environmentally friendly/as a means to get more fruits and veggies in your diet.

Intermittent fasting is another diet protocol, but it stands out for being less about the types of food you eat and more about how you eat.  The most popular way to intermittent fast is to not eat for 16 hrs, which then reduces your eating window to 8 hrs.  This gives you less time to consume calories, thus often resulting in fat loss.  But, there are many myths surrounding the dietary approach, such as it being a more efficient way to burn fat.  I have experimented with many diets over the course of my life, and I spent the most time with intermittent fasting (THREE YEARS STRAIGHT).  There is no magic behind it, and as a matter of fact, it can make it a little bit more difficult to maximize your muscle building potential.  Muscle is metabolically active, meaning the more muscle you have, the more you can eat (as your body needs more calories to sustain that mass).

I do not necessarily discourage intermittent fasting, as it can make it easier to eat less food.  But understand why you’re fasting, and do not expect a magic solution!  The only magic solution is putting the fork down!

Unfortunately, there is a difference between a health food and a weight loss food. There is definitely a lot of overlap, but it is not foolproof to assume you can easily lose fat by eating “healthy” foods.  Fruits and vegetables are both health foods AND weight loss foods, as far as I am concerned.  But, on the other hand, we have nuts.  Nuts are typically high in healthy fats, and also contain a little bit of protein (NOT A HIGH PROTEIN FOOD, despite it being touted as such) and fiber.  But, most servings of nuts are about 1/4 cup, and yield anywhere from 160-200 calories.  That is a very small amount of volume for a very large amount of calories.  It is valuable to note that fullness is based more on volume than it is on caloric content (meaning a handful of nuts will add a lot of calories to your body without adding a lot of satiety).  The bottom line is that not all healthy foods are low calorie, and thus not all healthy foods will help you lose fat.  Just because a food is healthy does not exempt that food from adding fat to your body.  Again, this is why it is important to understand food labels as well as what a certain food can supply for your body and needs.

I am someone who LOVES peanut butter, but it is difficult to keep in my life as it is sort of a “trigger” food for me (AKA a food that is difficult to not want to binge on).  It is for this reason that I choose to eat PB2 (powdered peanut butter) because it contains a fraction of the calories that regular peanut butter does, and it tastes almost as good. It has fewer calories because some of the oils from the peanuts are extracted. Some may argue that PB2 is not as “healthy” as natural peanut butter, as it is processed in some way.  The idea of a “processed food” is a whole other can of worms, but the bottom line is that PB2 helps me manage my weight.  And no, PB2 will not give you cancer.  Being overweight might.